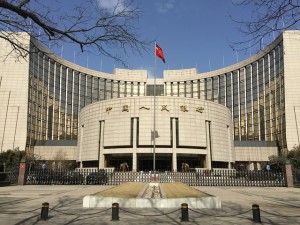 China has cut interest rates for the second time in a three-month period, while the Asian nation battles through a weakening economy.

This move is expected to make it easier for business owners and consumers alike to borrow money, but experts say it isn’t enough to make up for China’s recent economic downturn. China is currently ranked as the second largest global economy, only second to the United States. And until last year, its economy was growing at roughly 7.5% annually. So, what happened between then and now to cause such a significant shift in the economy?

Several experts have chimed in to offer their opinion on why China is experiencing an economic downturn. Wang Tao of the UBS  cited the trend as being the result of weak domestic demand accompanied with ever-falling oil prices.

“China’s real economic activity has slowed further in recent months, largely due to the ongoing property downturn,” said Wang Tao, an economist at UBS. “Weak domestic demand has aggravated excess capacity issues in many sectors, and together with a sharper decline in commodity and oil prices, have led to rapid disinflation, and for the industrial sector, deeper deflation. Against this backdrop, it would seem clear that monetary policy in China should be eased more aggressively.”

Of course, China’s financial woes didn’t happen overnight. Banks and financial institutions have requested government stimulus throughout much of last year, fearing the country’s current scenario would take place. The Chinese government largely denied these claims, however,  adding that a stimulus package would contribute to debt rather than reduce it.